The story behind this shirt is one I want to remember.  We were at a festival a couple of months ago and the Audubon Society had this fun booth with some interactive games. There was this one scene you were supposed to place magnetic birds to where their habitat was.  Adrian was immediately drawn to this activity.  The nice women there were trying to give him hints until I gently told them that Adrian probably could do it all on his own.  They didn't look like they believed me, but Adrian put every single bird in the right habitat.  And then he totally knocked their socks off and identified all but one of the birds by name.  They were so shocked and gave Adrian this patch (which they don't give to everyone) so he can be an honorary Audubon member. It was so funny when they were praising him, he just shrugged and said "I'm just into birds."  Which is totally true, he's even wrote some 'books' on the subject (how I love the 'books' he writes!). They loaded him up with all these color sheets to bring home and he knocked my socks off by coloring all these black and white images true to their actual markings...by memory.  Glad I finally stitched this patch onto a shirt. It makes me smile when I see him wearing it. 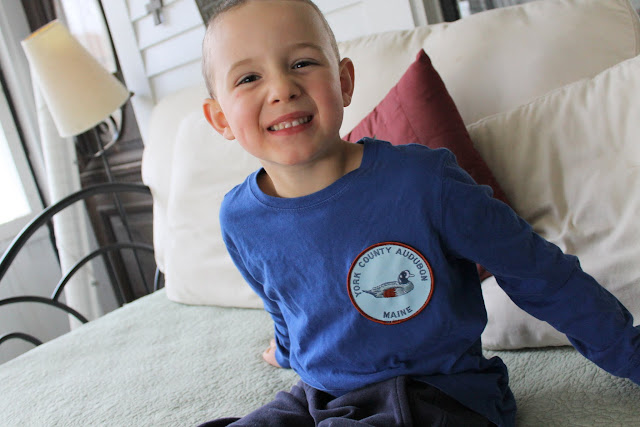