All feels right in this family.  We picked Adrian up from summer camp (which he had a complete and total blast at!), he talked the whole two hours home about camp, and now he's 'spending the night' on the floor of his sisters' room because they missed each other so. 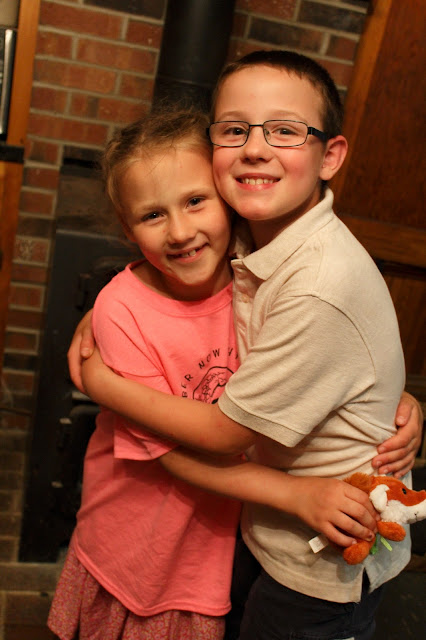 Gems I don't want to forget...

He was dropped off at my feet via piggyback from an older camper.  I got the biggest hug and kiss, right in front of all of his friends.

Said friend asked us if we really did paint our driveway with polkadots, if Trump really did come over for lunch, if we were really going to start a wolf farm.  (Continuing from my mom's tradition, I sent one letter that was ridiculous, utterly false and funny.) Apparently it was a hit with a large group of campers.

Adrian then pulled out of his pocket a Reeses Peanut Butter cup that he bought at the camp store for me. It had been in his pocket approximately 5 hours on a 90 degree day.  Apparently he had bought one for me yesterday too, but decided to eat it. I'm not really quite sure this one is edible.

The next thing he pulled out of his pocket was a letter from me. He carried my letters and little notes around. He said he didn't bother to read most of them, but he knew they were special notes from me.  (And I made him read a couple...he can totally read them. He just didn't bother, lol).

His head counselor informed us that he has learned a lot over the last week about farming and farm equipment.

Adrian couldn't wait to talk about the food.  He said he could eat as much as he wanted there and pick whatever he wanted.  He said he got to have candy cereal with Xs in them for breakfast (Lucky Charms, never had he seen those before, lol) and that he could eat as many sandwiches as he wanted. Apparently there were vegetables available but he skipped those and ate more of the treats instead. (Sigh.)

His favorite part was his skill class, which he picked Riflery. He spent his free time there playing tractors which he brought from home and found a group of boys to play with him too.

I also asked him what he missed most and is eager to get to at home.  "Books," he said.  He missed getting read to!  His next question was what was our next chapter book.  (He missed homeschooling! Mama's dream! Swoon!)

Will he go back next year? Definitely says he.  Next year the skill he wants to work on is Outdoor Living.  Game on, big boy! So glad you went, Adrian, but am even more glad you're home!