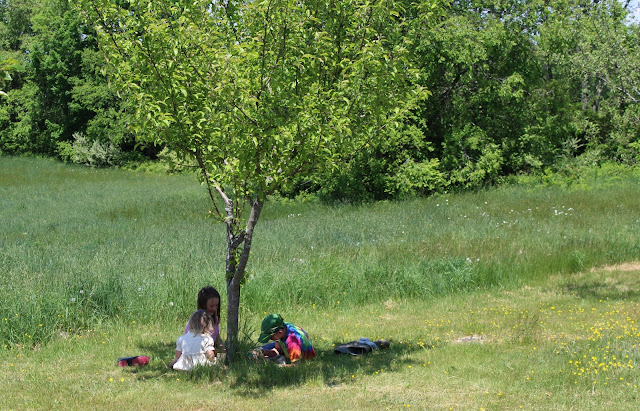 This picture is so much to me. It looks like an ordinary picture, but there's so much behind it.  We bought this homestead on Halloween in 2012.  Adrian had just turned 2, Audra was 3 months. What a crazy, crazy time that was.  I had just gone back to work from maternity leave, opposite shifts from my husband. My husband had all this mandatory overtime and was working near 60 hours a week.  Then we bought this house. Neither of the kids slept at the same time.  I remember getting one to sleep and I'd try to pack the car with just one asleep. Then when they'd wake up, I'd shuffle to the other house (1/2 mile away), feed them both and try to pack the car during the next kid's nap.  I can't remember how many hours I was working. Three or four days, I think.  It was so exhausting. I cried so much.  I remember when my dad came to visit for Thanksgiving, he spent so much time taking our stuff from one house and depositing it in the garage of our farmhouse.  I cried and cried. He was so helpful.   Then once we were settling in, everything broke. EVERYTHING. In both houses.  The washing machine broke at our old house.  Then within the same week the washing machine broke at the farmhouse. I was a cloth diapering mama with no washing machine (thankful for kind neighbors and rapid delivery).  Then the dishwasher broke at the old house, but worked at the new house.  I ended up bringing laundry baskets of dishes to the farmhouse to wash.  But all of our food was still at the old house. The water pump broke at the farmhouse, during a long weekend (hello emergency service fee).  We still owned the other house, were paying two mortgages, and eating rice and beans. Then the furnace at the old house broke.  Months later the furnace at the farmhouse broke.  I hardly remember that first year.  Having two kids under the age of two, half settled, everything breaking, trying to work, functioning mostly as a single parent with being opposite shifts, moving, two mortgages....I could go on and on.  But I also was so so so happy, living in my dream house with my two kids and husband, chickens, a garden. Oh memory lane... 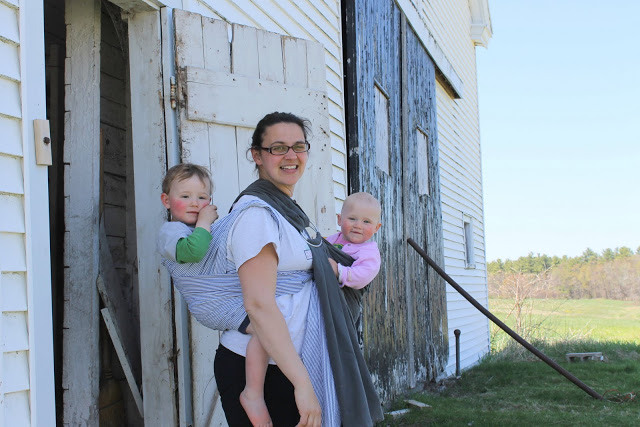 Head to Mother's day (2013) and I told my husband what I really wanted was fruit trees.   Historically he has not been the gardening type, so I'm sure he was thinking that it was a waste of money, we barely had time at home together, one more thing, etc.  I don't really remember what he said, but I distinctly remember what I said.  "I know you think I'm crazy, but years from now, we will be happy we did. Years from now when life is not so crazy, they will be established and providing fruit. We'll be so thankful.  Someday our kids will sit under these apple trees and play and we'll look back and think how glad we are that we started an orchard first thing."

The other day, I looked outside my kitchen window and saw in our very very sunny backyard that our kids found shade.  Shade none other than the very apple trees I planted 7 years ago. Shade under an apple tree that had more flowers and growing apples than ever before.

That someday I dreamed about is today.  I dreamed of apple trees providing for us a harvest. I dreamed of an orchard providing some shade for my littles to play.  And here I am, experiencing the dream I dreamed. My bucket is filled to the brim with thankfulness.

Here's our orchard in 2013 (with only two kids and our late dog, Kammie) 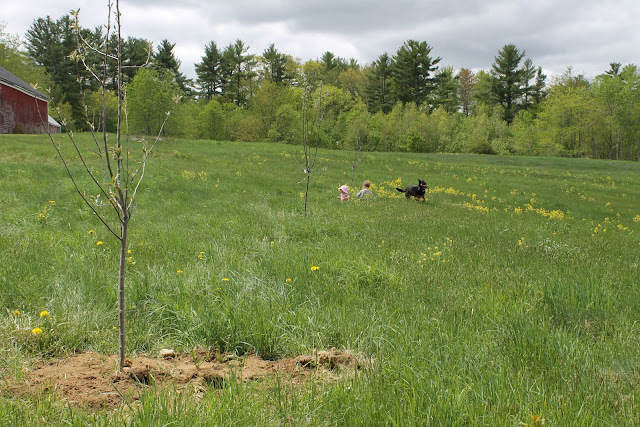 And our 2020 orchard, with twice as many trees now much taller, now with three kids. Life is good. 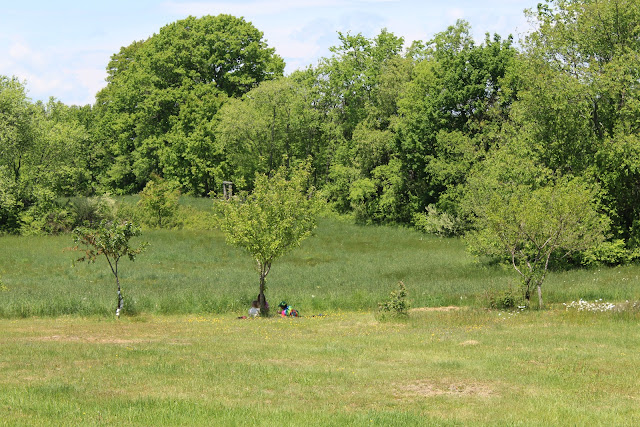