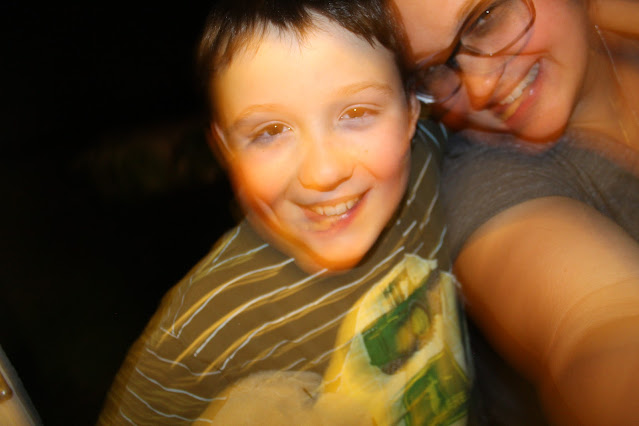 After I tucked the littles into bed, I went outside to find our whole back field lit up with lightning bugs.  So magical. As I enjoyed the beautiful scene in front of me, I realized that my kids have never seen the lightning bugs in our backyard because they are always asleep when they come out. I knew the girls were asleep, but I suspected my oldest wasn't yet asleep.  I called him down. He was so confused. I assured him he wasn't in trouble, but we were heading outside.  "What?  Why, mama?" he asked. "Just come," I urged.  He came barefoot, in his pjs that are getting a wee bit too small, clutching his favorite stuffed animal, a puppy named Lucky.

Once he was out there, he quickly realized why I dragged him out of bed. He exclaimed his awe a number of times as the sky lit up hither and thither. We huddled together watching the spectacular nature fireworks show. I am pretty sure he smiled the whole time.  He told me his bucket was full. Mine was overflowing.

It's hard to believe that he's nearly 11.  Whenever I think that, I automatically start thinking of the newborn bundle who only wanted mama, the two year old who called me 'seet mama' (sweet mama) and wore tails wherever we went, the five year old who was still sobbing when I went to work, but would sit for hours reading books with me when home, the 10 year old collector of John Deere who likes when I hug him until he decides that's enough hugging (minutes can go by).  How is my time with him home more than halfway up?

I think he'll remember tonight forever.  I suspect I will as well.