Somehow over a  month slipped by without a gardening update.  It's not because I haven't been out there. I assure you, I have been.  In fact, it was in April that I did way too much and my tendonitis flared right up.  From that point forward, I decided I wasn't going to do but a mere 20-40 minutes at a time.  So that's what I've been up to for the last 5 weeks.  Bookends of the day, I've been out there, getting dirty.  A 40x40 garden is certainly time consuming and feels even more so since I've only been able to plant in small bursts.  It's a relief today was a rainy day...a fantastic respite from planting.

Speaking of soil, I am so proud of myself. It's the darkest it's ever been and it's all due to all the manure hauling I've been doing. Hopeful the yield will beat last year's yield with this improved soil quality. Last year I had >700 pounds.  This year is at 28.5 pounds thus far. Not a bad job since it's been mostly greens.

Speaking of greens, I thought I'd take a quick minute to give my views about them. While my whole family loves greens, the amount of lettuce I grow is hardly any. I get so frustrated with all that work and it bolting before we even get into it much.  Who can stand bitter lettuce? Not me. While do grow some short lived greens, the greens I focus on are kale, swiss chard and collard greens. Those don't bolt.  They stay green and tasty up until frost and beyond.  You can sautee, use for salads or put in sandwiches. I've had this little system going with my collards. They grow like crazy through the year. I pick them up until frost. I don't pull them over winter. Come spring, they pop up and grow. We enjoy fresh collards until they flower out. They flower out (about now), die and dry out.  The seeds spread, which end up being my next round of collards.  We've had so many the last couple of weeks due to this system. Only now, we've had collard greens so much, we're all ready to move onto the next veggie.

The majority of the garden is from seeds, although I did buy peppers, eggplant and basil.  I didn't bother starting peppers and eggplants this year and my basil failed 2x. I also bought a few tomatoes since theirs were much farther along than mine. A great way to extend the harvest. I did the same with cukes, I have some I grew and some I got already started, just to extend the harvest.

So what's planted other than those I just mentioned?  Cauliflower, broccoli, cabbage.  3 kinds of beans and peas. Zucchini, yellow squash. Tons of tomatoes.  Parsnips, carrots.  Sugar pumpkins, spaghetti squash, butternut squash and acorn squash. Red and white potatoes. Onions. I planted more annual flowers than I have ever planted before. I'm sure there's more than what I listed, I just can't remember. I keep tucking something else in.  I still have another round of corn to plant, but wanted to wait a couple weeks, hoping to stagger when it's ready.  I didn't grow corn last year and it didn't do  well the year before that. My kids are really hoping for a good harvest.

So far something seems to be eating the tops of my tomatoes.  Or it's the cat rolling on them.  Definitely could be the latter.  We have more grubs than I've ever had before, I hope they don't bother things. The kids are so much older now that they are much better at not stepping on things.  It's usually the cats and kids who threaten the plants the most.  Those cabbage butterflies have been out, hoping two cute kids with butterfly nets (thank you grampy and grammy!) will fix that situation.

Even though I haven't been giving you the garden play by play updates, I've been taking pictures.  Hopefully you can see the transformation. It's been five weeks since the end of April, here's the week by week. I promise the next update won't have 5 weeks worth of updates. 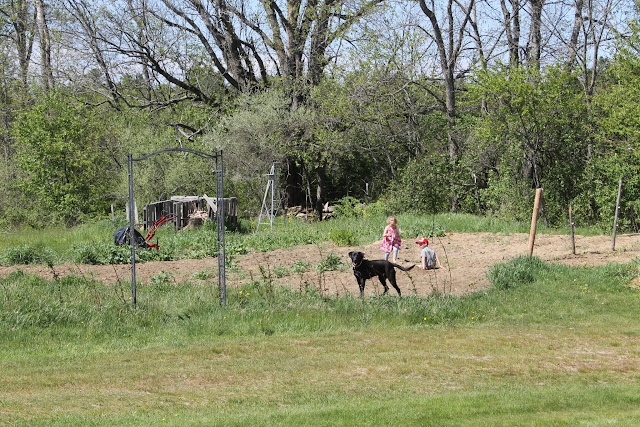 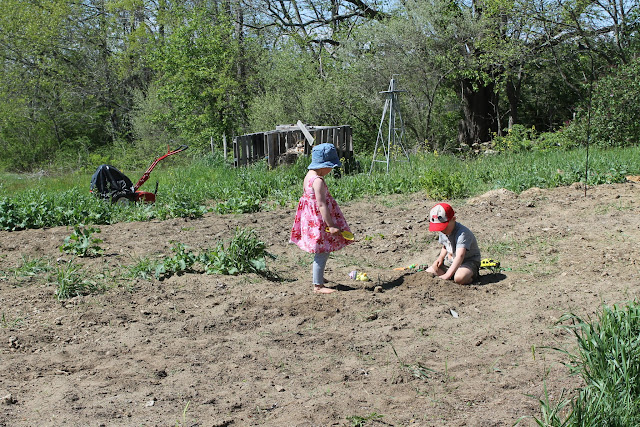 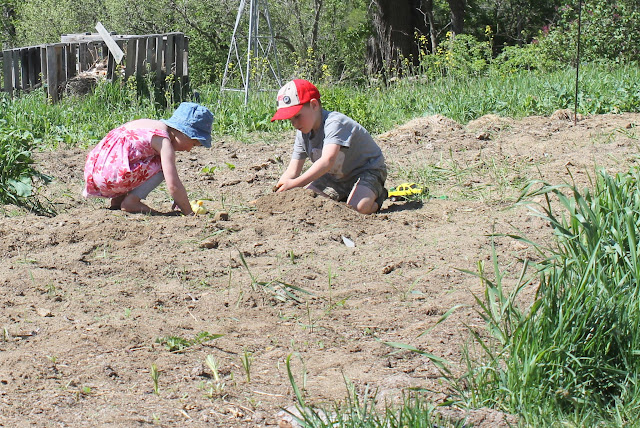 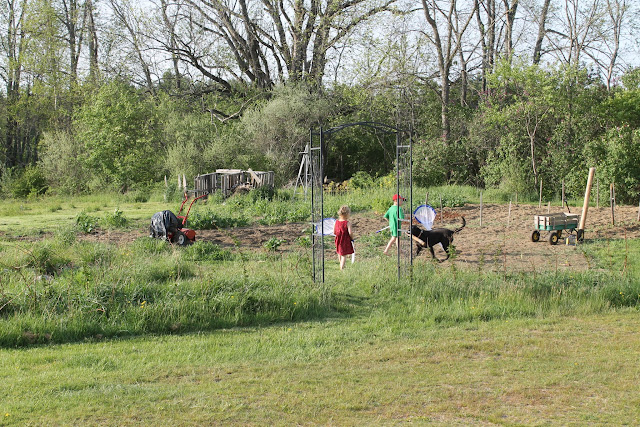 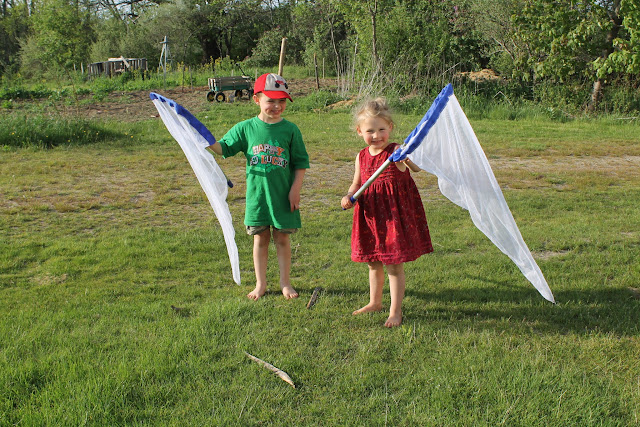 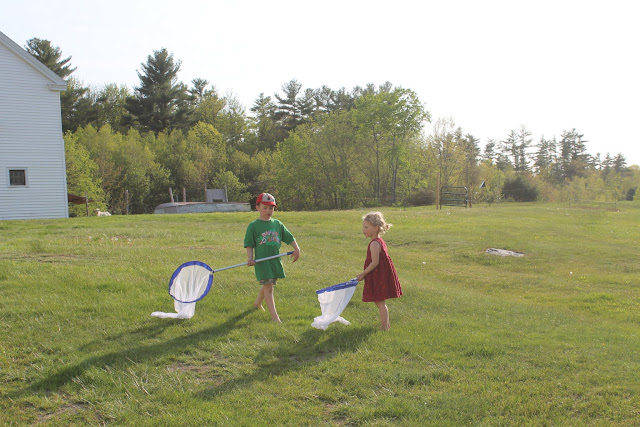 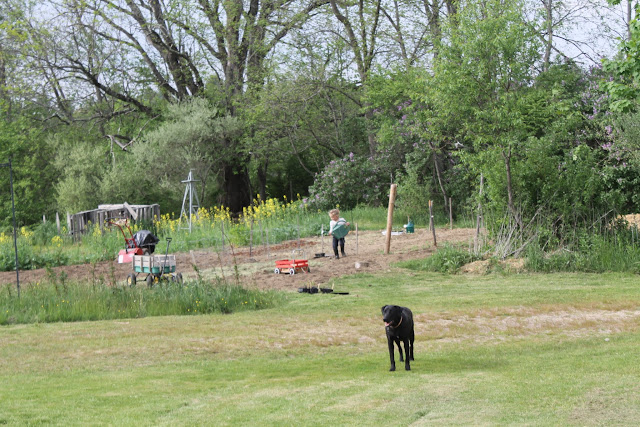 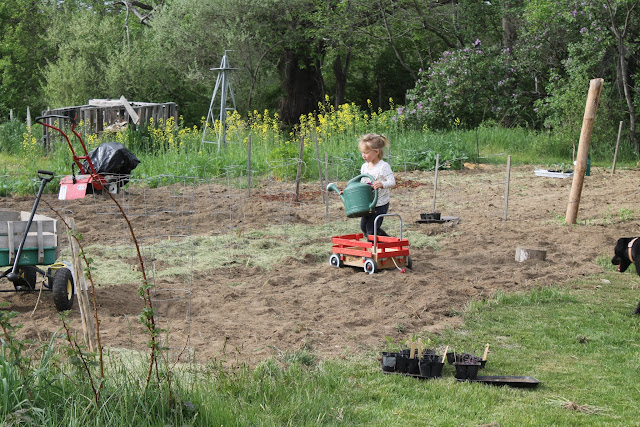 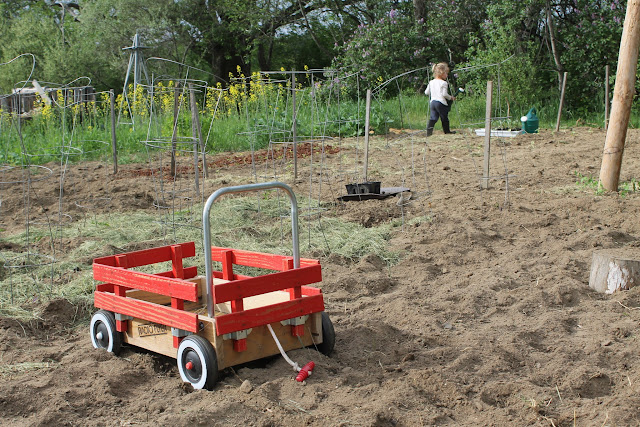 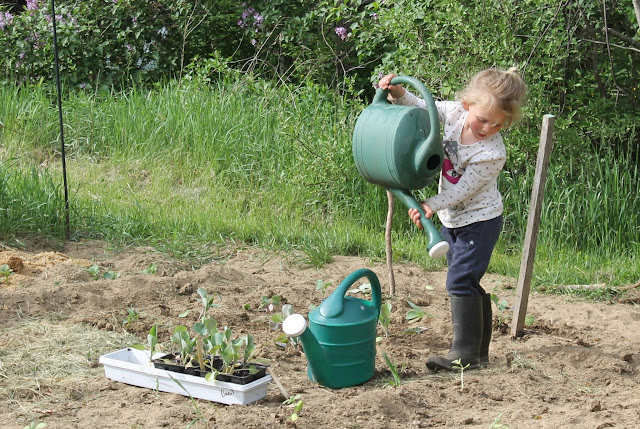 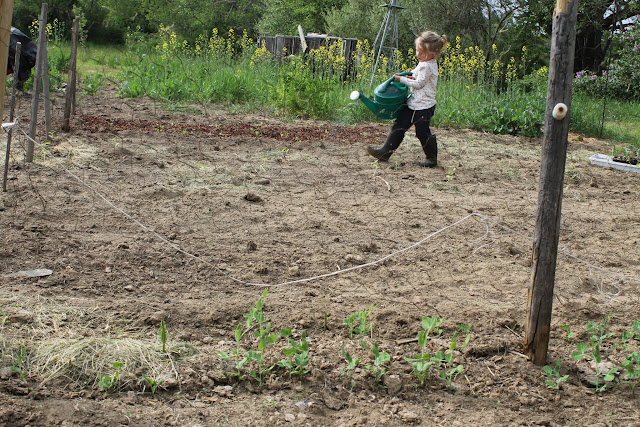 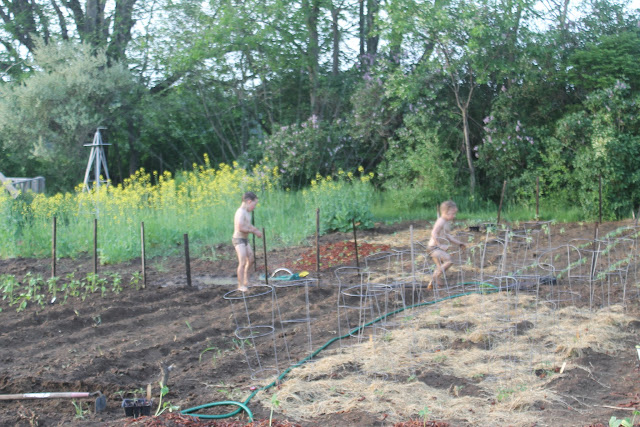 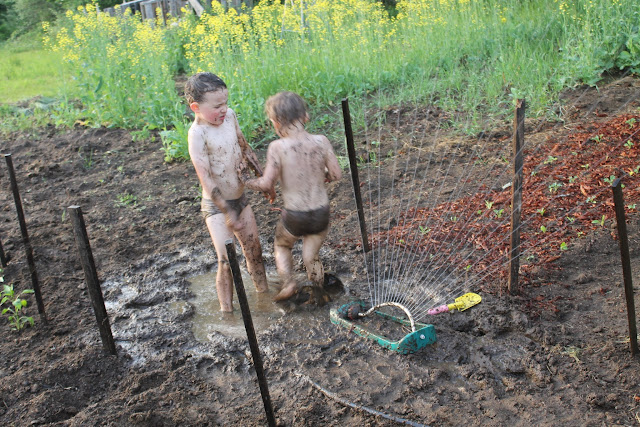 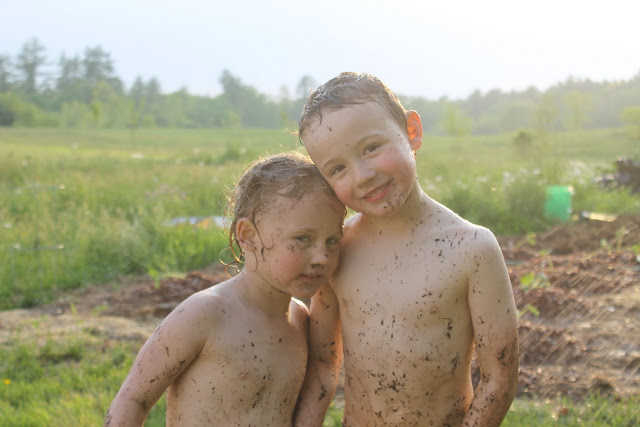 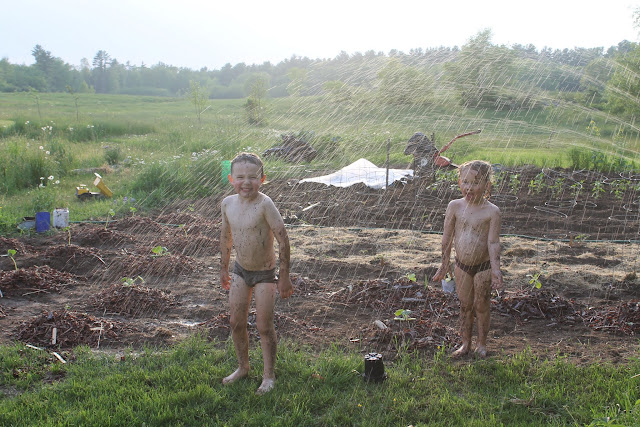 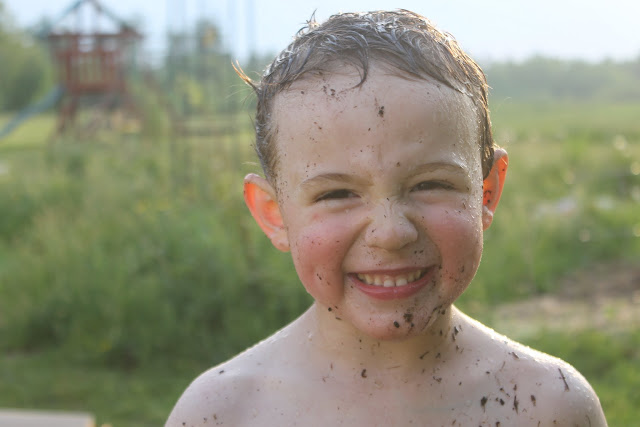 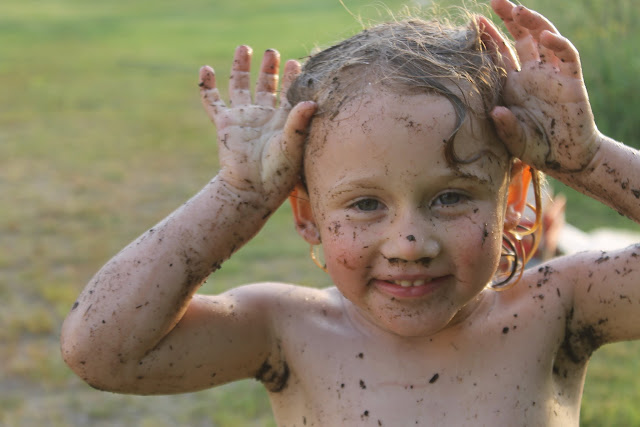 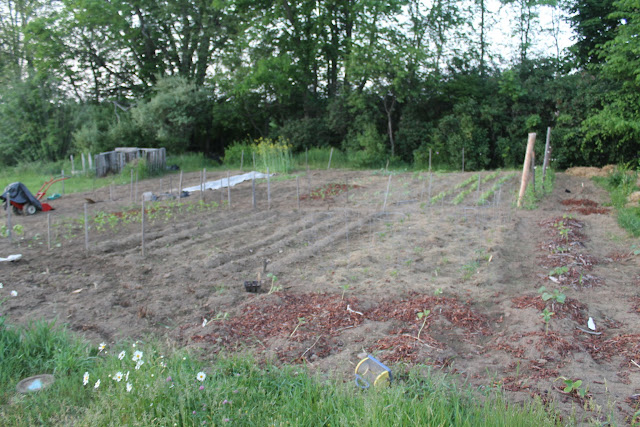 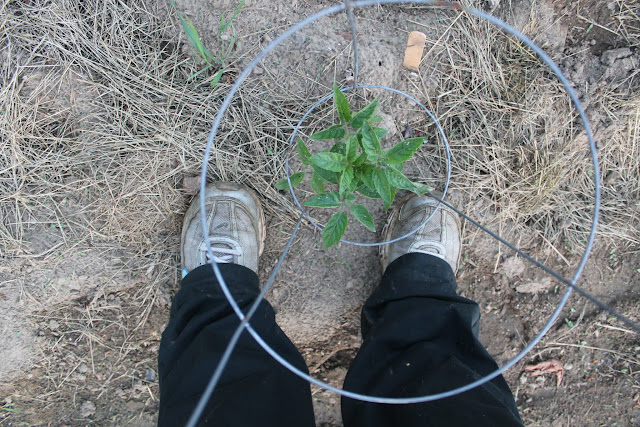 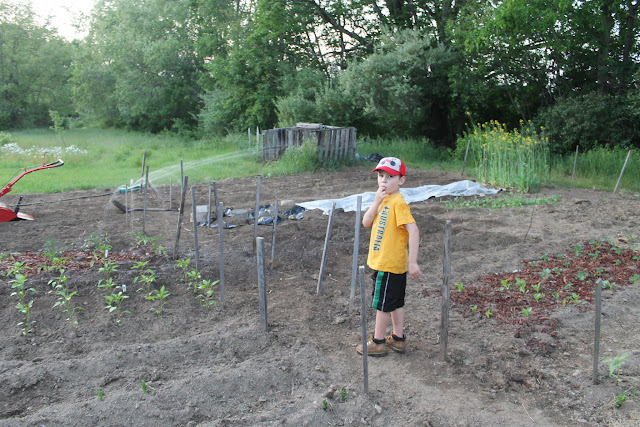 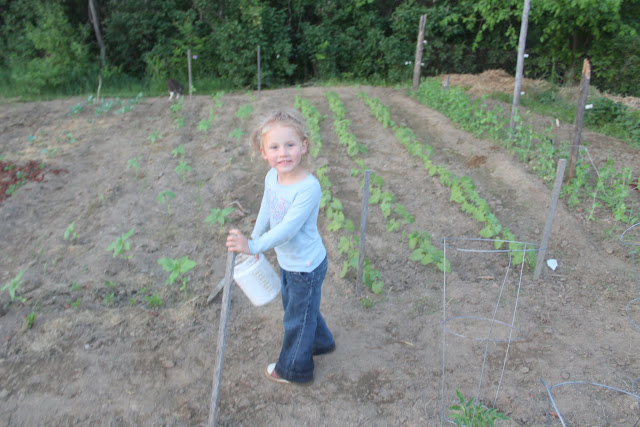 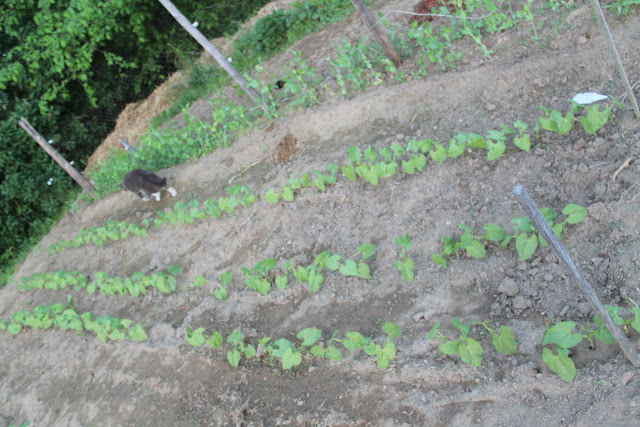 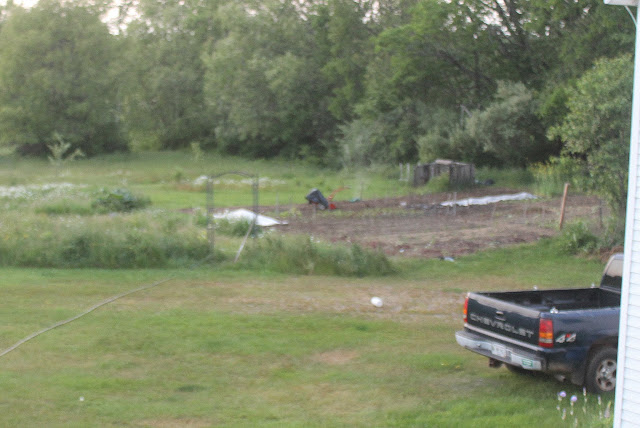 Although I complain about the planting, it is mighty magical how the three of us come together (my littles and me) to plant that which we need for the year.  It's something they'll remember as an adult, just as I remember planting the garden with my parents 30+ years ago.  Now that it's all in, we're hoping and praying for a good harvest. And my husband is particularly praying the potatoes do better than the squash this year. After all the squash we've had last winter, I don't blame him one bit. 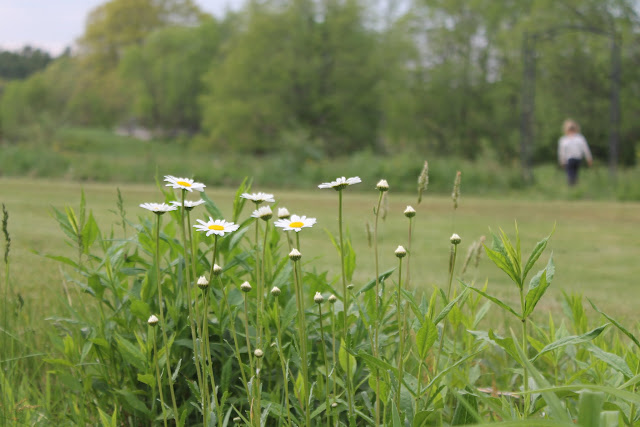