I’ve already shared that I make all of our own bread.  Delicious and more healthy for us, except when I’m tempted to eat the whole loaf of bread when it’s warm.  When a new loaf comes out, there’s inevitably a slice or two left from the last batch.  Being the frugal mama I am, I can’t bear to throw out a single slice of my homemade bread.  So, I slice it and put it a bowl, covered with cheese cloth.  It dehydrates.  I can then use it for French Onion Soup.  You can use any bread you have, it doesn't have to be homemade.  This is an easy peasy staple. I often slice the onions and set aside until a meal time.  I’ll let the onions caramelize while we're eating to maximize time.  I’ll add the remaining ingredients after the meal and let the soup simmer. By the time I’m done with the cleanup, we have a pot of soup for the next meal. 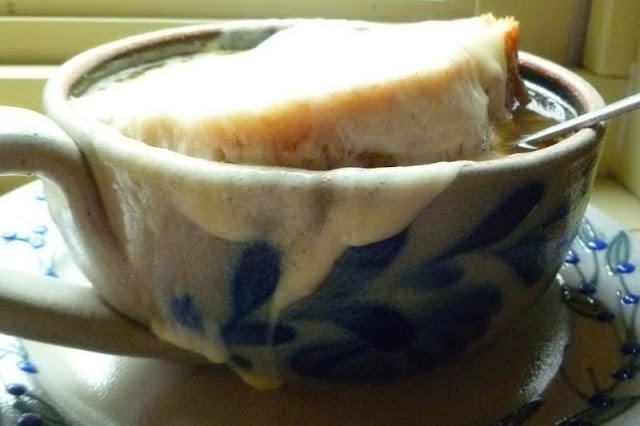 Caramelize onions in oil (about ½ hour).  Add Garlic, cook for another couple minutes.  Add broth and spices and simmer for ½ hour.

Serve in crock.  Top with slice bread and provolone cheese.  Broil until cheese is melted.

*For broth, we like to keep “Better than Bullion” around.  It’s condensed and whips up quickly into broth.  French onion soup is typically beef broth, but if you’re vegetarian, you can easily substitute vegetable broth.