Okay, what's the big deal is what you're thinking.  Only my husband knows what a big deal this is.  That's because I always make him do the haggling.  It can and should be a regular part of antiquing.  I know that and I love to get a deal.  Only when I think that I might attempt to haggle, my heart rate increases, my palms become sweaty and I am afraid I'm going to pass out.  I just can't do it.  I mean...what if they say 'no' and get so angry that I suggested they lower their price that they get a machete and decide to decapitate me?  Totally could happen.  Which is why I make my husband haggle for me.

Only there was a major problem.  Sweet girl was sleeping in the car.  He couldn't go in with me.  I was all alone...well, except my sweet little boy on my back.

It was an estate sale...you could wander through the barn, house and workshop, choosing what you like best to get a price quoted by the sellers.  It's sort of odd, walking through a house and sifting through stuff that was someone's who just passed away.  But that's besides the point.  I went room to room in this 1800s house.  Oh my, the stuff!  I don't think previous habitats got rid of anything!  Lots of old stuff/antiques.Plus the old house was fun just to see.

Onto the haggling story.  Because, you know...*I* haggled.  And I'm sure you're dying to hear the story.

Well, I made my selection.  I went for a quote.  $45 they said.  (Insert beating heart, sweaty palms and quivery voice.)  I busted out my cash and said "All I have is $23."  And then I waited.  (You see, that's the hard part about haggling.  Typical me would ask for a deal and then talk them right out of giving me a deal.  Best to be silent and pray in my head that they aren't going to turn crazy on me.)  They said 'Well, the cost is $45".  I repeat "All I have is $23".  (Which totally wasn't a lie...that is all I had).  They said I could make out a check.  I told them I didn't have my checkbook. (Which was also totally true).  Believe it or not, I just waited. But they weren't budging.  (Oh goodness....I hope they're not planning on how they're going ballistic on me is what I was thinking.)  I am not sure if they heard my heartbeat...but it was thumping louder than a frat boy's boom box. Finally, I offered "You can take away whatever you want from my pile, but the fact remains is that I only have $23".    He took away my buttons (Which is fine, I wasn't married to the idea of having an extra jar of buttons anyway) and said "It's a deal".

Aren't you dying to see what I got? 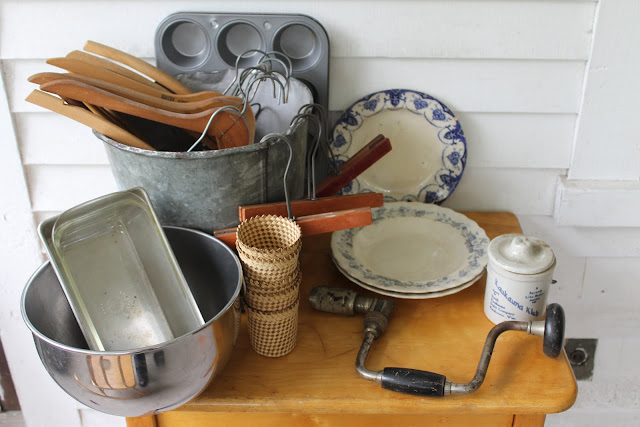 A definitley not antique 12 cup muffin tin.
14 wooden hangers (we're on our way to all wooden hangers...just about there!).
A maple syrup bucket.
3 blue and white antique dishes.
A blue butter crock (that's older than the hills and is likely worth more than $23 anyway).
A hand crank for tapping trees.
6 basket cozies...isn't that fun?
Another big mixing bowl (since I have been needing more since starting our little bakery out front).
Two more loaf pans (I've been looking for these for a bit so I can make 8 loaves of bread at a time.)

Given the resale value of most everything I bought is quite high, I got a great deal.  We all know how I like a deal.

But the major question is...what do I like better?  A deal?  My awesome finds?  Or that which is on my new find in the plate below? 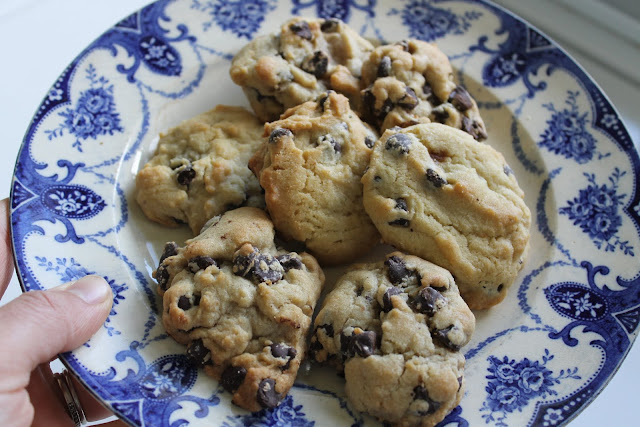 I'll probably still freak next time I try to haggle...but at least I have one success.  Tell me, how good are you at haggling?