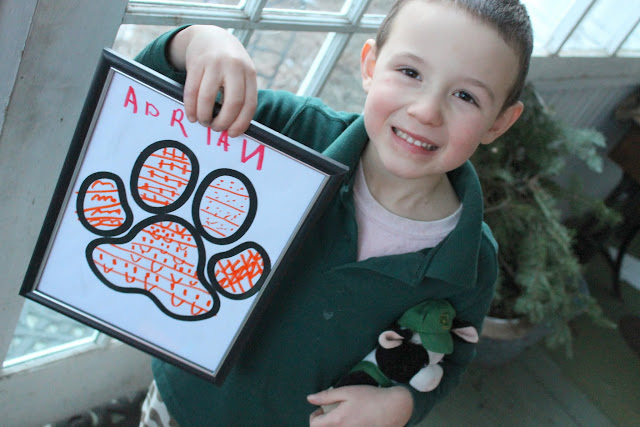 Forgive me for a mama brag moment...but here goes.

Our little Adrian has always, always, always had such an intense time separating. As in cried all day when I went back to work when he stayed home with his dad. Sobbed for the 2 hours a week when he'd be at my neighbors every week, even though we saw them almost daily, up until he was over 2 years of age. Every activity has had such an elaborate transition, even though we'd always be right there.

Since his sister was doing dance, we told him he could sign up for something.  No interest in dance.  Claims he hates sports. Our local animal shelter hosted a "camp day" entitled "Pizza and Pets".  Learn about pets, do crafts, eat pizza, snuggle animals.  Read him what it was all about and he wanted to be signed up, so he said.
We fully expected him to either ask to not go or ask for a parent to be there with him.  But nope. Not the case. Although he knew no one and has never been to a daycamp, he marched right in.  Upon pickup, when he saw me, he gave me the grumpiest face ever.  I thought he was mad that we left him, but instead, he was mad that it was time to go!  Look how proud he is up there with the print he made at the program!

Just what we, as his parents, had a feeling about all along.  In time, through supporting him and not pushing him, he'd grow his wings. He's all ready to be signed up for the next camp there.  We couldn't be prouder!