You know, sometimes when you decide that you're not going to be in a hurry, more gets done.  But then again, sometimes not.  On this particular day, I cannot believe how much was accomplished. One of the first things I wanted to do is divide and move my perennials.  Ground freezing is soon, so it's a time sensitive manner.

For two days, it's been my two kids and me, with daddy working overtime and no car.  Day one. The goal was to divide a few of my favorites.  I took inventory of what's already at the farmhouse so I didn't move what was already there and slowly started to pot the ones I must not be without.  Most of my plants were dug and shared by friends...I didn't want to leave those stories behind. I somehow managed to pot 53 different types of perennials!  Fifty-three.  And that's leaving the stuff that the farmhouse had. And leaving the stuff too hard to find now the frost hit and the stuff I don't care for. Oh my.  The new owners of the house we live in now won't even notice I took anything (assuming we'll eventually have new owners and we won't have two homes forever).  I...um...didn't realize how addictive my perennial gardening had gotten.  I didn't even get a chance to show you my gardens.  Oh well, you'll see them as they grow at the farmhouse. And if you're local, once they grow again, I am happy to share.

Here's part way....  (Naturally, the fire truck was handy in case there was a fire.  You can never be too careful). 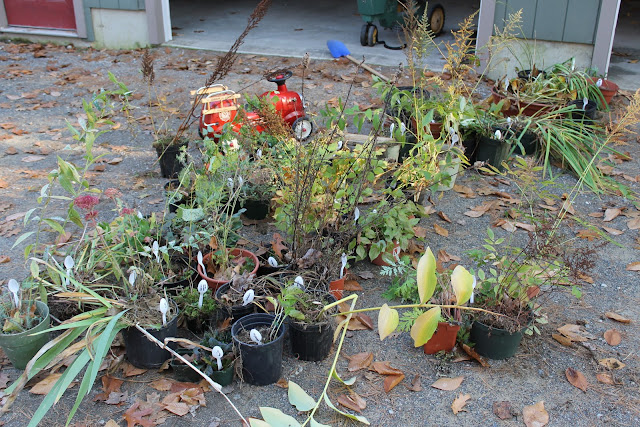 I, of course, had two very helpful...sometimes too helpful...little hands. 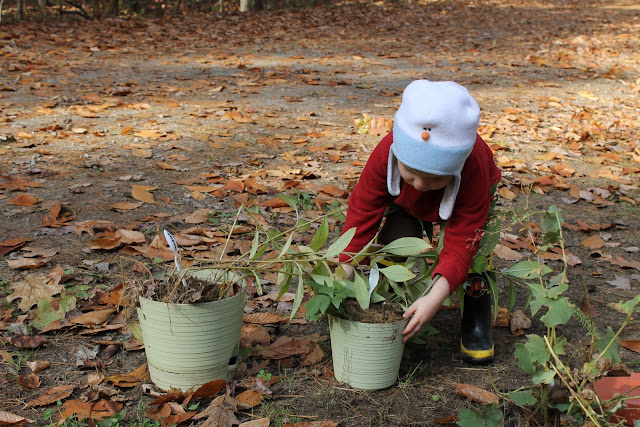 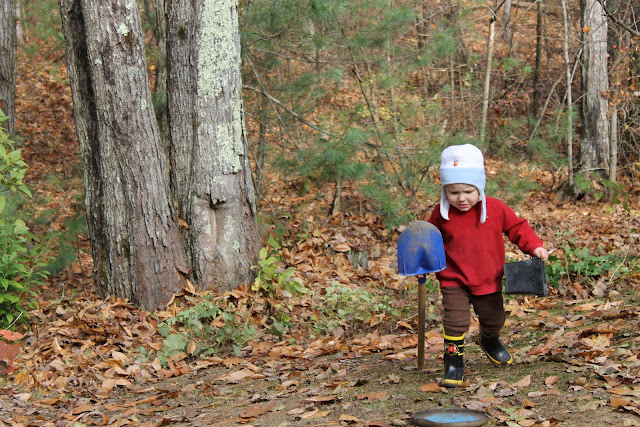 As well as two sets of eyes sometimes watching and sometimes resting. 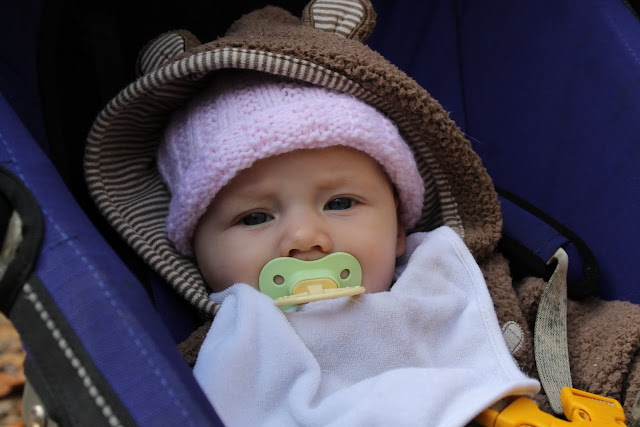 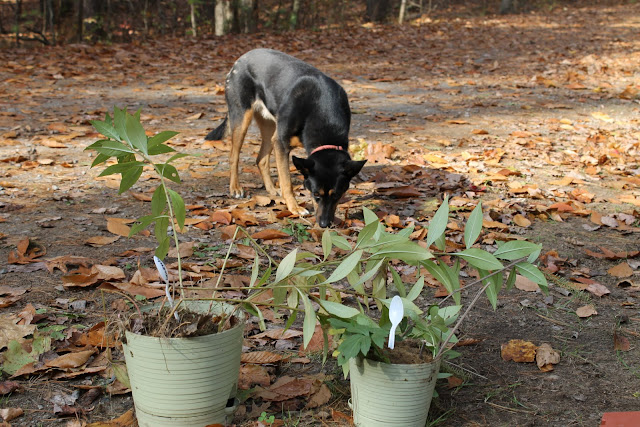 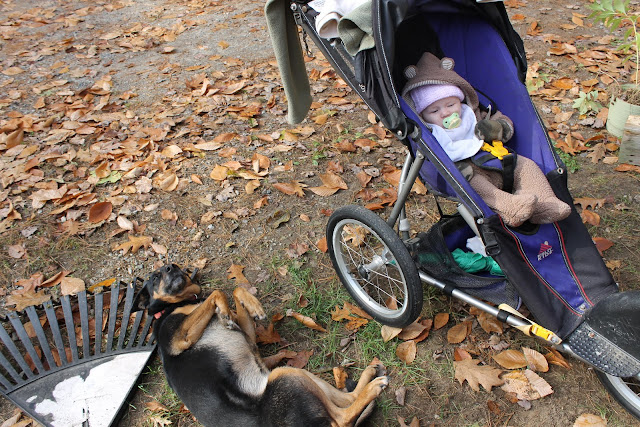 I used a sharpie and plastic spoons to ID the flowers.  Good idea in theory, until my helper "reorganized" the spoons for me. 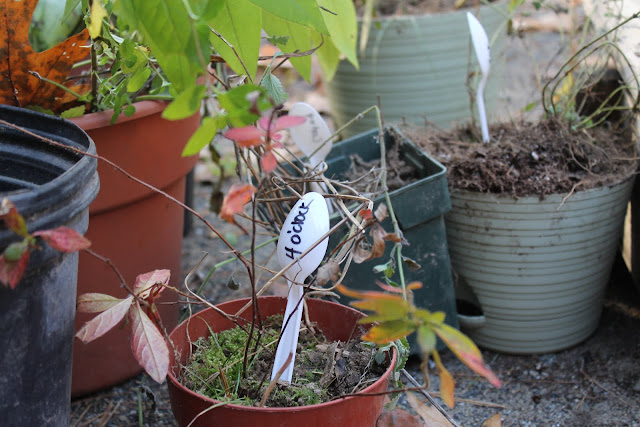 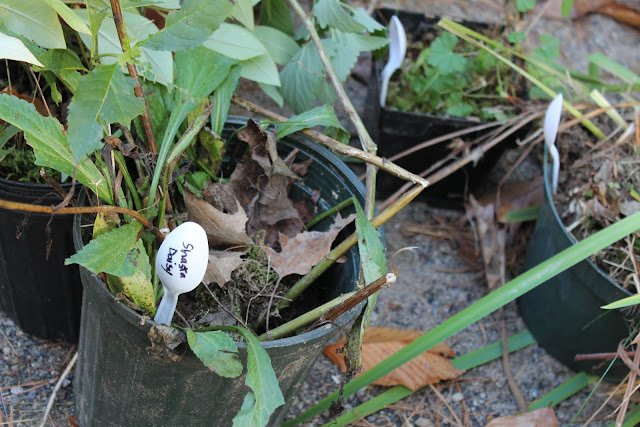 Day two... we successfully moved them to our farmhouse.  The goal was to plant as many as I was able, given that I was by myself with two kids, it didn't seem hopeful. But miraculously, I did plant them all.  Well, except the rhubarb.  Wanted to ask my husband on that one.  You'd think that it would be a trite crazy, all that planting by myself with the two littles.  But, in fact, it was one of the most mentally relaxing days I've had in a long time.  The sun was warm (well, you wouldn't know it, as Adrian insisted on wearing this hat), the conversation swell and you can't beat the setting.  Sweet Audra was kind enough to balance wanting to be in mama's arms and chilling in the sun.  Adrian carried the pots to me and hauled excess dirt in his John Deere loader.  I dug away. I couldn't believe how rich the soil was.  There were at least 3 big fat worms in every hold dug.  I found a broken bottle, some pottery and some old nails....and dreamed about how those very things ended up there. 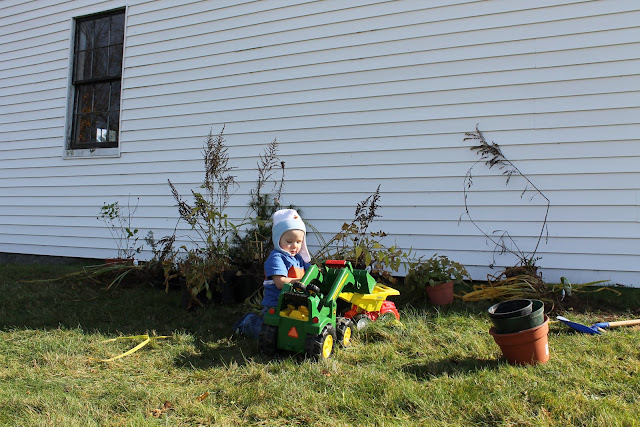 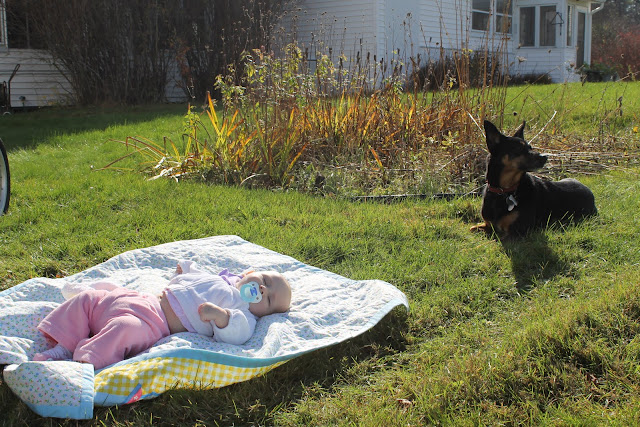 At the end of the day, we were a tad dirty and definitely tired from that hard work, but still mustered up the energy to make cream cheese brownies. (Hey, we earned them, don't you think? Must blog that recipe, too...) 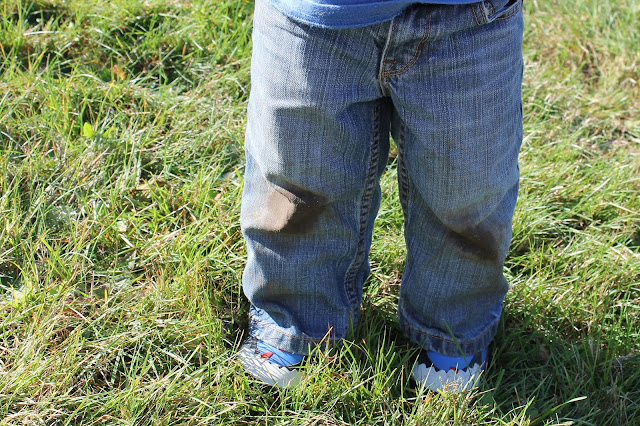 A fantastic day at the farm.  A first day of many.  I'm so thankful for that. 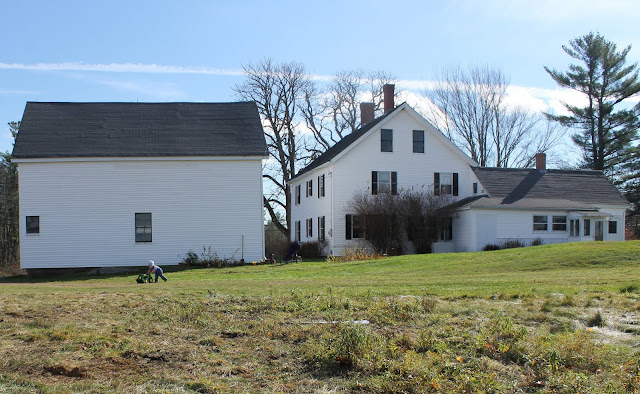