I've been asked what I use to wash our cloth diapers, so I decided to blog about it.  I got this recipe from the eco friendly family blog.  Decided to give it a try.  It works, it's cheap and super easy to make. 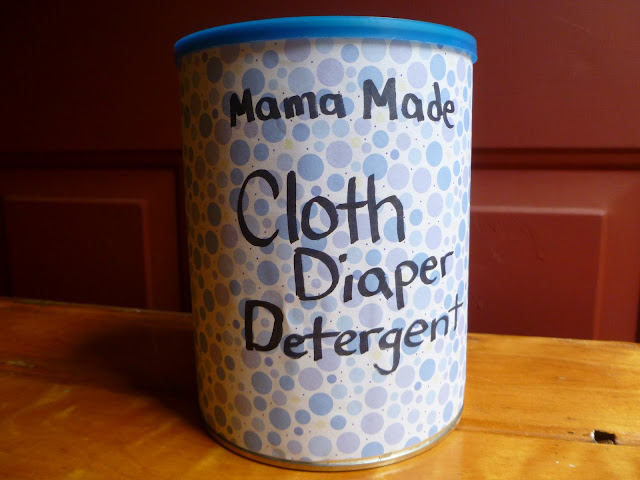 Here's what's in it: 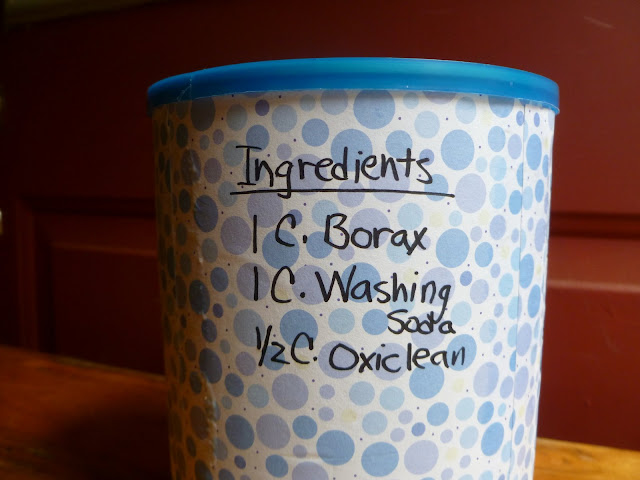 And I wrote the washing instructions for daddy...who claims he can never remember how to wash them, so he leaves it for me to do.  Right.  Love that man anyway!!!  If you're interested in why we don't have poppy diapers, see below *. 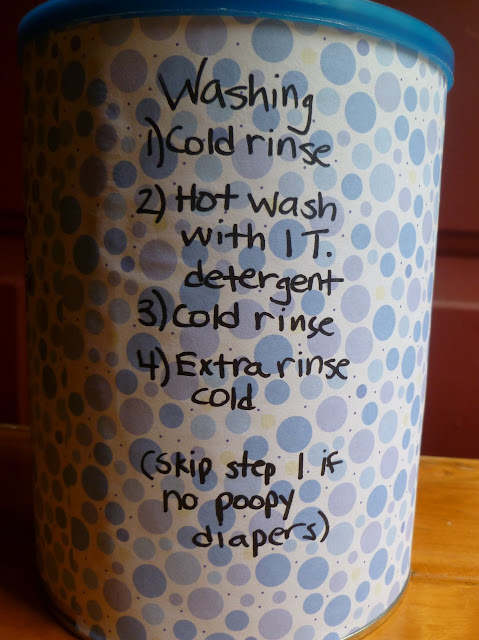 And the canister?  It's a formula container (see explanation below**).  I just washed it out, decoupaged paper on it, wrote on the canister and then decoupaged a top layer to protect it.   I must say, it looks pretty snazzy!

Onto the explanations....  This is probably sharing too much information, so skip if you don't want to be too well informed.
* We don't have poppy diapers hardly at all.  Because our little one poops in the potty and has since he was 5 months old.  You think I'm crazy, but he does.  Since I'm a speech-language pathologist, I specialize in reading communication.  At 2 weeks of age, I always knew when my little one was pooping.  I thought again and again about why I was waiting for him to poop and then cleaning it up?  Besides, isn't going on the potty what 3rd world countries who don't have diapers have to do? Finally, I decided to put him on the potty when I knew.  And it worked.  By 5 months, he was pooping on the potty all the time.  I looked it up on the internet to see if anyone else was doing this.  What do you know?  It's called Elimination Communication.  I read this book and learned that I can train him to pee on the potty too.  Most days, he pees on the potty at least half the time.  Sometimes he makes it through a whole day without any misses.  Sometimes he gets up in the night to potty.  He often makes it though naps dry and goes potty when he wakes up.  He often goes 8 hours at night dry and he always goes potty when he first wakes up.  He likes dry diapers, so when we're out and about, he often appreciates a chance to pee.  We don't make him go...we follow his lead (daddy's fully on board too).  It was the first way we really communicated with each other.  I think it's helped us read him better and taught him the value of his communication earlier on.  It's been awesome for us.

** I'm finally ready to talk a little about my breastfeeding challenges and why I had to use formula.  (Disclaimer...I'm certainly not judging anyone's choices/reasons for formula feeding. This is just a reflection of me...and what was important to me.  I support any which way a mama cares for her little one, without judgment.)   It's been quite the road for me, but hopefully I can inspire someone to continue. I was set on being an exclusive breast feeder.  Committed.  Excited.  But, we had a sick little boy a few days after he was born.  I wasn't making anything but a drop or two at a time.  He was losing weight, a lot.  I was in denial.  I sobbed big sobs when I had to start formula.  I mourned a death when I had to go get more bottles.  I was told that I could breastfeed for 'fun', but it wouldn't be to feed my baby.  More big sobs.  But, I didn't give up.  I still kept breastfeeding him around the clock for 'fun'.  I began researching and taking oodles of homeopathic remedies...up to 14 various all natural supplements a day (More Milk Plus, Mother's Milk Tea, Fenugreek, Oatmeal, Brewer's Yeast).  And guess what?!  My milk came in when he was 4 weeks old!  Not much, but none the less, it was some.  I made about an ounce every three hours at my peak.  I was elated.  And re-committed to giving my baby every ounce I could.  I joyfully got up in the middle of the night.  I pumped when I was at work, until he was 6 months old.  I surprised even the lactation consultations.  He's 13 months and still nurses 2-3 times a day.  Although I never gave him much in one feeding, I'm so proud of myself and so thankful that the amount I have given him over time is quite a bit.  Tears of joy are streaming down my face at this moment because I am so darn happy that I was able to do what I did. Thank you, God.  My dad, a veterinarian, told me that this problem happens a lot with cows-sometimes the milk doesn't come in with the first calf, but you wait around until the 2nd calf before sending her to slaughter.  Always an interesting perspective being compared to livestock, but that's my dad.  Fingers crossed that my milk will come in for my next calf, so I don't have to be slaughtered.  There's hope. :)