My night last night was later than I had planned, little ones up in the middle of the night and I was up before the sun for chores.  Not that that scenario is atypical for me. It's actually quite typical.  It's what happened next that turned my day into a not so great one.

I put Ophelia, our milk cow, out to pasture like usual and turned around to get the calf.  By the time I was back, she had already pushed her way out of the fence.  This has happened twice before and I should have known to put her right in the barn. But no, I was trying to hurry to get to work and I just put her back in the fence. Shortly after, she escaped again and broke the fence in the process. ( I think she's mad that I didn't move the fence to new grass today. I did move it yesterday before work, but didn't have the daylight to move it again after a 10 hour workday. The newer pasture isn't bare either, Ophelia just had other plans.)  This time though, she thought she'd sprint around our yard. I hollered to the kids to get their dad, praying and sprinting from here to there after those cows by myself. And then TO THE ROAD they thought they'd go. Its an absolute miracle I got them both from the near road to the barn by myself.  I came in the house crying. I was part relieved, part releasing my fear, part upset at my husband because he never came to help, part because I don't know if having them is too much. It's a love/hate thing, doing it all on my own.  To be honest, although most days I love this lifestyle, there are other days that I feel so incredibly defeated.  Regardless,  I somehow managed to not be late to work.  I don't' think my heart has recovered from that scare. Ophelia spent the day in the barn. She earned herself a time out, that's for sure. 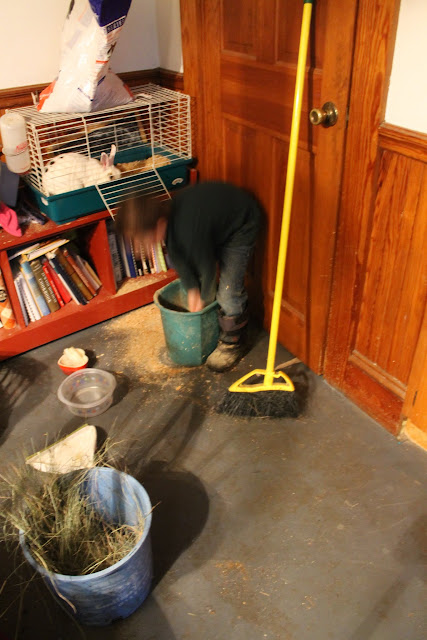 It was at the end of the day and I was doing a half of a dozen household tasks in the kitchen when I heard my little guy say, "Mama, I know you had a hard day. I'm going to help."  He decided to do the rabbit cage. There was rabbit bedding everywhere.  Just what I needed...another mess.

You know, he did clean it all up. He actually did a fantastic job.

No matter what obstacles Adrian faces, he keeps farming on. 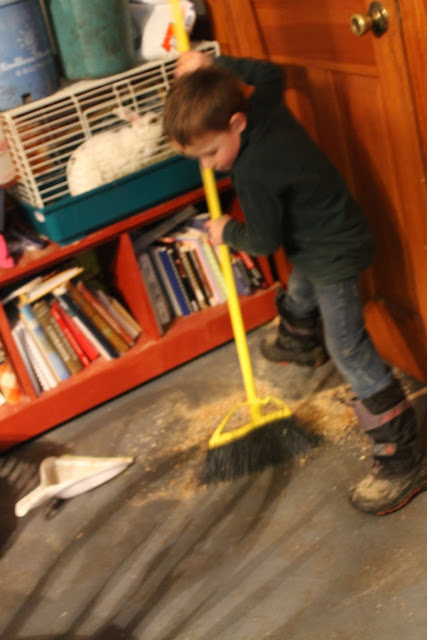 Moments like this makes me do a 180. It's so easy to get down in the dumps when problems arise. I need to pick myself up and remind myself that we sometimes have bad days.  But bad days are just a day with a beginning and end, they don't need to define future.  Do I want to continue this homesteading life? Absolutely  One bad day won't stand in my way.  We may or may not always have a cow,  but I imagine I'll keep going with the from scratch food.  Today I'm not discouraged, I won't let myself.  Onward I go.


(And if you could keep me in your thoughts and prayers as I am so hopeful those cows will stay in the fence).